We have pushed hard for two days. They were long sailing days. We were in two minds as to whether to leave Cocoa Village having had sustained heavy rainfalls during the night and more rain and winds predicted. Knowing we had the goal of a few days in St Augustine, we took the calculated risk. The river gods smiled on us. Skies cleared, winds abated and dolphins frolicked along the way. We reached New Smyrna with plenty of light. We berthed at the new marina – beautiful facility, but were fleeced horribly. Who ever heard of charging $20 for one night of electricity in addition to the marina fee? It left a bad taste.

We set sail early the next day. We needed to detour around a small island, due to dredging of part of the ICW channel. We set sail in smooth, almost oily waters. Unfortunately the water current gods were against us the whole journey – 10 hours.

The scenery made up for it. We meandered around hundreds of tiny islets, avoided shoals, traversed man made canals and waterways, as well as sailed in manatee waters which required slow speeds and no wake. 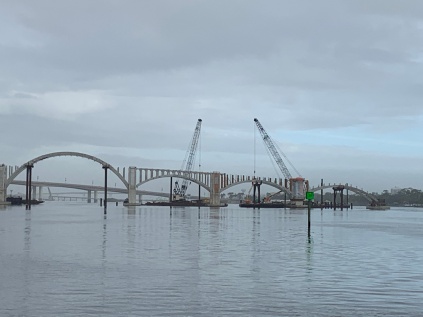 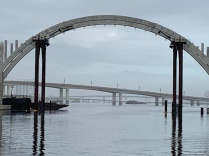 We sailed under a bridge which was being demolished. 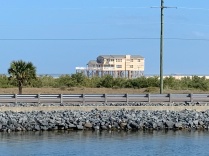 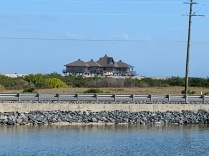 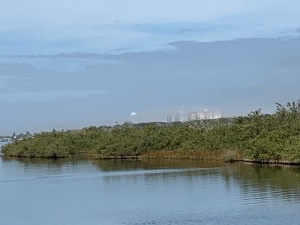 Watched a town materialize out of fog.

I mentioned the water current gods. I think they were playing with us. For 8.5 hours the tide slowed us down. For one hour, on the  approach to St Augustine, the current propelled us at warp speed.

Let me paint you a picture of our exhilarating berthing. The town marina is situated next to Bridge of Lions, a bridge that must be raised for Bushranger to sail under. Now imagine my wonderment as we are fast approaching, needing to peel off to port then execute a 180 degree turn to starboard, while being swept by a 1.5 knot current and buffered by strong winds. We slewed sidewards into the outer T-head bay. All good, so far. BUT… two extremely large and luxurious cruisers are berthed to our port with a large catamaran on starboard. One would think the current and wind would be negligible in the basin and one could slow down. Not so! To Mark’s credit, he handled the situation brilliantly. With only one engine and no thrusters, he executed a 3 point turn with engine gunning and mere feet to spare. We nudged our berth and now reside happily bobbing up and down securely tethered. If I had had longer to think about our maneuver, my life may have flashed before my eyes. Instead, we live to sail another day… and Mark is a very clever captain!

4 thoughts on “Arrival in St Augustine”