Yesterday we set sail in glorious weather. Cast off was first light with breakfast on the go. We enjoyed a colourful sunrise in peaceful surroundings.

Mark worked hard at charging his solar batteries in temperatures of 31 degrees Celsius. 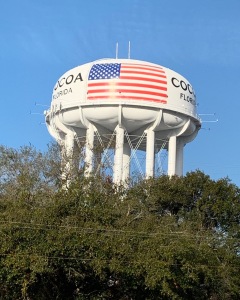 We arrived in Cocoa Village Marina mid afternoon in time to rent a car and explore Cocoa Beach on Cape Canaveral. Cocoa Beach is the home of “I Dream of Jeannie”, space and surfing memorabilia. Cruising down the  colourful main street brought back memories of black and white tv news reports of the rocket launches of the late ‘60s and early ‘70s.

Today we visited the John F Kennedy Space Center (KSC) which is located on Merritt Island, a causeway away from Cape Canaveral. We did a bus tour to the launch site pads for the Apollo and Shuttle missions. Cape Canaveral is used for unmanned rocket launches with three launch pads still used today. The launch sites on KSC have been repurposed for NASA’s Orion , SpaceX’s Dragon and Boeing’s Starliner spacecraft which are in the testing phase for manned  flights. 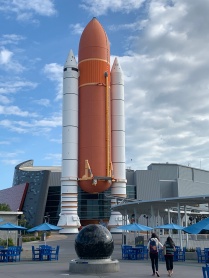 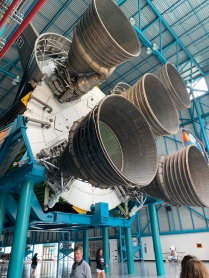 We saw the huge Vehicle Assembly Building and Launch Control Center, and spent time at the Apollo/Saturn V Center. Exploring the Apollo to Space Shuttle age; observing the Racing to the Moon era; visiting the modern day International Space Station; celebrating pioneers, heroes and legends of the space program; seeing up close original rockets and spacecraft; and enjoying interactive activities – these were all totally inspiring, showcasing human ingenuity and curiosity.

I am so pleased we were able to visit Cape Canaveral and the Kennedy Space Center. It was a richly rewarding experience and one I can now cross off my bucket list.

It was fortuitous we spent the day on land as the weather gods decided to play ugly. Temperatures plummeted, rain fell and winds blew oysters off rocks!