Traversing the southern states, ascending the majestic Blue Ridge Mountains, experiencing the Civil War ghosts, savouring the southern hospitality and discovering gems along the way, compels me to record my thoughts.

After laying up Bushranger and undertaking all the hibernation processes needed, we set off for the battlefields of Corinth and Shiloh. The interactive centers and preserved battlefields are well maintained and give a clear understanding to this era of bitter conflict. The memorials are graceful and a deep reverence pervades the air. Shiloh, with all the emotions that name conjures, is deep in the American psyche. We toured the sites of the battles in the car with explanation leaflet in hand. A moving experience.

Next, we headed to Memphis, where alas, we said goodbye to David. On Sunday morning we left him at the airport to fly to Las Vegas, while we headed on our epic car trip which would take us from the most western part of Tennessee, Memphis on the Mississippi River, to the most eastern part of North Carolina, New Bern. We thought we would see some stunning scenery and we were partly correct. 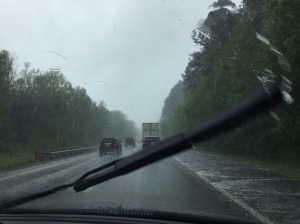 The weather was abysmal – shocking thunder storms and at one point hail. Not much fun when traveling at 70 mph to be hit by hail stones. We pulled to the side of the road, as did other cars and trucks. The sides of the motorway ended up white as snow!

We arrived in Asheville, North Carolina, after 10 hours of driving. Climbing to this city perched in the Smoky Mountains, we drove along canyons, though mountain tunnels, beside rivers and streams and through valleys thick with low slung clouds. Breathtaking! We visited Biltmore – the home of the Vanderbilts. This French chateau/palace/castle is set in grounds and gardens, delicately sprawled on the side of a hill in the Blue Ridge Mountains. Un-be-lievable! How the uber-rich live!

The next day we drove for a further six hours to New Bern, North Carolina, where the Loopers rendezvous is being held.  We have met some very knowledgeable and friendly loopers. This morning we attended a couple of sessions, but this afternoon we truanted. We decided to go on a mission of discovery…

New Bern – rich in American Revolutionary War history; rich in Civil War history; rich in architectural history. And oh, such nice people. New Bern is located at the confluence of the Trent and Neuse Rivers. Our hotel room looks over the stunning river and marina and multiple bridges. The front of the hotel opens up on to an historical city, preserved in its Revolution and Civil War eras. 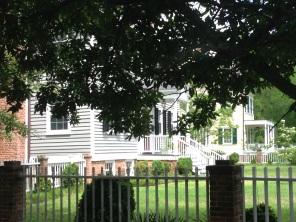 The city was the original capital of North Carolina and has Tryon Palace – the British Governor’s residence. During the Civil War the Union forces captured the city at the beginning of the conflict without the loss of any buildings and held it has a military headquarters and hospital. 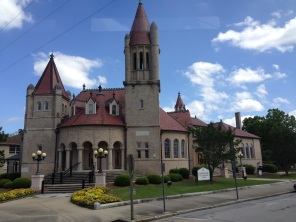 The homes, churches and graveyards are as they were in the bygone era. The historic town is picture perfect, with great detail going into preserving and restoring houses and buildings to their original beginnings. The wrap around porches and Spanish Moss oozes old world charm. I am in love with New Bern. We are definitely coming back here on our looping adventures.

A little known fact is Pepsi-Cola was formulated here! Who knew?

… And did I mention what New Bern has on every street corner?

Such is life! A very charming, southern life!

The Tennessee River is a beautiful waterway, complete with thick foliage, wooded

islands and enchanting embayments. It varies in depth and width: sometimes branches dangling in the water and at other times grandiose sandstone bluffs stand sentinel with magnificent homes commanding spectacular views. The scenery is ever changing as we follow the gently snaking path of the buoys: a nuclear power plant; coal power plants; a built up industrial area; railway and vehicle bridges to sail under or asked to be raised;

dodging catfish pots and logs and a couple of tires! We have conversed with tow barges; lock masters; and river boat people. All have been unfailingly courteous and welcoming.

The waterway is in almost pristine condition. Turtles are playful. The bird life is prolific, blue herons, ducks and Canadian Geese, and what look like little blue wrens, are in abundance. We’ve seen osprey and an unconfirmed bald eagle. The fish are plentiful and the Tennessee River is the playground for fishermen along its length. Today we saw a deer at the water’s edge.

Deep South language and culture are a delight. The graciousness of southerners is constant, even when you almost accidentally knock into them in Walmart, it is they who are first to apologize, even though it is not their fault.

“Y’all” means “you all” and “Y’all’all” equates to “yous” in Australian parlance (plural of you).

“Putzing” means “tinkering around” and we’ve done lots of it!

“Lockdown” means you enter the lock to be lowered down the river. “Lockup” means you enter the lock to be raised. So far we have gone up the Tennessee River to Chickamauga at elevation 682 ft above sea level. We have entered locks: Chickamauga 48 ft; Nickajack 39 ft; Guntersville 39 ft; Wheeler 48 ft; and the big one, Wilson 93 ft. Took us half an hour to descend in Wilson.

“Slip” means a berth, not to be confused with “on the hard” which means to be slipped in Australia. It’s a whole new language. And a smile is a smile in everyone’s language.

We had a lovely stopover in the picturesque port of Florence. We were able to use the courtesy car for sightseeing purposes and then again to take us into town for lunch and then dinner. A courtesy car is provided free of charge to Loopers and transients. Yep – I like this southern hospitality!

We were also serenaded all night long with the haunting sound of train horns and birds chirping. Back home, birds chirp an hour or so before dawn. Not here! We became confused, thinking it was time to get up, when it was only 2am. Birds don’t seem to sleep in Florence! Nor do fishermen who launch boats at 2 and 3am. 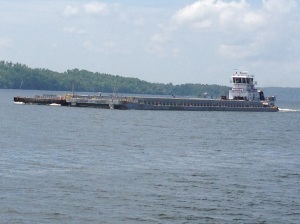 On this leg the pace is slow and leisurely. Almost Tom Sawyer-like. It is peaceful and unhurried. As we head to Aqua on Pickwick Lake, we head to the busyness end of our holiday – the winterisation of Bushranger. This solid and sturdy and oh, so pretty boat, will be put into hibernation until we next awaken her to continue Bushranger’s Legs.

On Sunday we start our road trip from Memphis to New Bern in North Carolina. Here we will attend the American Great Loop Cruising Association rendezvous, before heading back home.

Thanks for joining us on this first leg.

Florence is a hidden gem for history buffs.

✅ Pope’s Tavern – was originally an ideal stopover for travelers from Nashville to New Orleans in the 1800s. Andrew Jackson stopped at Pope’s Tavern on his march to the Battle of New Orleans. It served as a hospital for both Confederate and Union wounded at Shiloh. On the second floor it is filled with artifacts from the Civil War. We were given a private tour by an elderly southern gentleman who spoke in a soft, lilting voice with words from a bygone era. Most commodius.

And ate lunch in City Hardware – an American diner. Docktails aboard a fellow boater, followed by dinner at Ricatoni’s.

Loving the Alabama way of life… 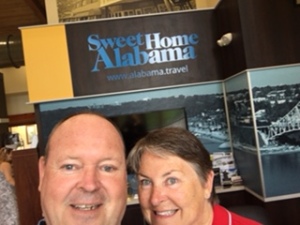 Guess who came to dinner? And stayed? David!

After a final and gastronomically delightful dinner, we said our farewells to Gregg and Carol, purveyors of southern hospitality.

6.30 am departure from Ditto Landing saw us heading down the Tennessee River for a full day of sailing

to our destination of Florence, Alabama.

We sailed past nuclear power stations, through sunshine, wind and thunderstorms. But before you think, ‘oh no‘, the thunderstorm was a blessing. We locked down through Wheeler Lock and were then informed we would have a 4-hour wait while a barge had to be disassembled and locked down through Wilson Lock. The thunderstorm was not to the barge’s liking and we were told to “y’all go’n thro”. We cranked up the engine and plowed in.

This meant berthing at the gorgeous Florence Harbour Marina in daylight and with a smile on our faces, albeit drenched! 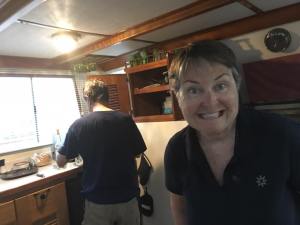 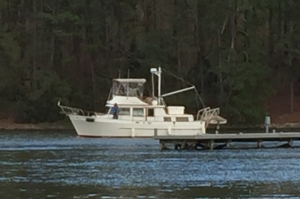 Onwards, ever onwards downstream, past islands and fishermen’s playgrounds 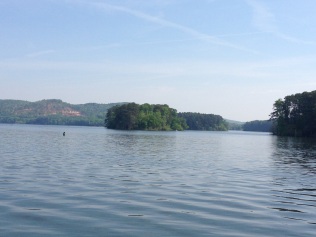 And into the sunset. Just perfect!

END_OF_DOCUMENT_TOKEN_TO_BE_REPLACED

Chattanooga has our hearts. Met up with Claire and Brad, Nash and Ben, in this fun town.

Sailed the picturesque Tennessee River eastwards through the Chickamauga Lock with the family onboard. All had jobs to do. All loved sailing new lands and waterways, and developing new skills. 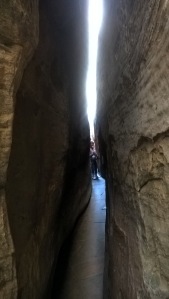 We ventured into the canyons of Rock City in the mountains bordering Georgia. Scaled Lookout Mountain; journeyed on the incline railway (not for the faint-hearted); spied (over the brick wall) the Chickamauga-Chattanooga National Military Park where a major part the Civil War was fought; 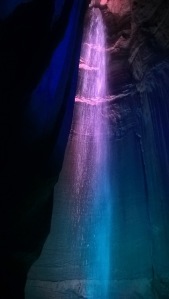 descended into the cavernous depths of the underground Ruby Falls; patted the Chattanooga Choo Choo; and dined and dined with laughter and much good cheer.

The last night Nash and Claire slept aboard Bushranger. Our first overnighters!

So many memories shared with family and good friends, Carol and Gregg.

Someday, we are coming back.

What a pretty river town! Moored between two bridges, on the steps of downtown – there is absolutely nothing to dislike about this historic city. Southern charm at its finest. 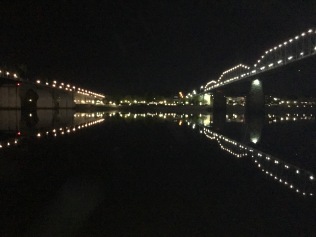 Plane delays and storms; tornado alerts; thunder and lightning were never going to stop us. We used the time to plan, prepare, and familiarize ourselves with Bushranger. Good friends, Gregg and Carol, fed us, provided shelter, chauffeured us, and helped us in innumerable ways while waiting for the perfect weather to arrive.

And it came. Today we sailed the Tennessee River – from Guntersville to a small embayment on Nickajack Lake – under windy but sublime conditions. The scenery was breathtaking: the river a bucolic, meandering waterway. We saw the iconic American Bald Eagle and commercial river barges.

And today we were blooded with our first lock – Nickajack Lock. And yes, we did it! And yes, we are amazing!