Sunday was another glorious day of sailing across the Chesapeake. Fair winds and calm seas, although the decks were too hot to go barefoot! Nary another sailor in sight. However, a dolphin or two were spied, as well as a baby stingray ‘flapping’ its wings as it hurriedly crossed our bow. 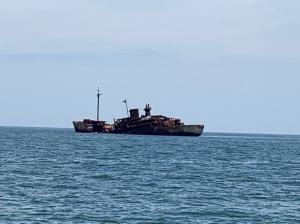 At last we saw a lonely lighthouse, instead of only red and green channel markers. And at the mouth of the Potomac lies a rusted hulk. The navy used it as target practice. Now it sits forlorn in its watery gravesite.

After 6 hours of sailing, we dropped the hook in Horseshoe Bend on the St Marys River, a tributary 9 miles from the mouth of the Potomac.

St Marys City was the original capital of Maryland way back in 1634 but lost out to Annapolis shortly afterwards. It is now an historical site with reconstructed buildings.

St Marys College is intricately woven into the tapestry, providing life to an almost ghost town.

We tied up to the college’s waterfront and explored the grounds of the small but first-rate college. It is one of only two Public Honours Colleges in the USA and is ranked 6th best liberal arts college in the nation. Staff to student ration is 10 to 1 and all students must complete an Honours Degree. Not a bad place to come to study. 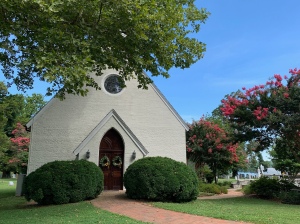 We also explored the grounds of the Episcopal Church and graveyard, which are situated over some of the most spectacular water views, right down to the Potomac. 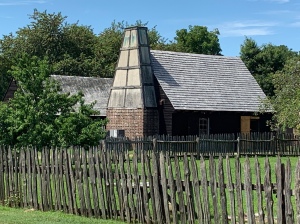 The Historic City has original and reconstructed buildings.

There is an ongoing archeological site, unearthing new discoveries. We were fortunate to strike up a conversation with the coordinator who showed us the dig site and a piece of Native Indian pottery found that morning. We were unable to visit the museum, as it is Monday and nothing is open in the USA on Mondays! (We have found that out a number of times!)

After a pleasant sojourn we cast off to search for another verdant cove, this time in Smith Creek – a smaller tributary of the Potomac closer to its mouth. We avoided fish traps (vertical sticks in the water with nets attached below the surface) and the ubiquitous crab pots, by a zigzag approach, thankfully well marked.

We found the sought after verdant cove and dropped the anchor. We are surrounded on three sides by foliage dipping into the water. There is an oppressive stillness to the air, one which promotes a siesta. Once duly completed, Mark donned togs and goggles for a quick dip to clean the water speed impeller. Alas, to no avail, as the murky water prevented seeing the impeller. Still, he proved there were no alligators and no sharks on the north side of the Potomac!

So tonight, we will swing on the hook in very pretty surrounds, possibly with the aircon on!